During the course of last season, I established that an 8 gameweek data was optimal for my spreadsheets.  From GW17 onwards, my spreadsheet’s better than bookies odds predictions were based on each team’s last 8 home or away games, whichever was relevant for the upcoming gameweek.

Recently, I found myself wondering to what extent teams’ attack and defence strength ratios fluctuated throughout the season.  And I wondered if looking more closely at how these values changed would reveal which teams showed the most improvement post lockdown.

So I coloured each team’s best to worst 8 game sequences on a scale of blue to red, and was pleased to discover it was easy to see where in the season each team’s best and worst xG form was from the start of the season to the finish (left to right).  In the end column I highlighted in blue the teams that performed to their best levels in terms of xG during the run in.  The table below is how it looked for xG expected to be scored at home vs an average defence.

Disregarding relegated BOU, this table suggests ARS BUR CHE LEI and SOU finished the season strongly in terms of attacking threat at home, but it is important to understand that the blue to red scale was applied to each team separately.  The table below is the same as above, but with the same scale applied to all teams relative to each other.  Now we see that we should not perhaps be getting too carried away with the attacking strength of ARS and SOU at home just yet.

Next I ranked each team according to their highest, lowest and average (mean) ratios. The table to the right shows these rankings for xG expected at home.

As can be seen, CHE were a force to be reckoned with at home. Their best 8 gameweek attacking spell at Stamford Bridge was bettered only by MCI, whilst on the defensive side of things (see table below), the xG they conceded in their closing 8 home games ranked as the best 8GW sequence recorded by any team last season. Away from Stamford Bridge they ranked only 5th and 10th best respectively.

WOL ranked 4th best in terms of their xG ceiling at home, but drop to 8th place with regards to their xG floor. This does not account for why they finished behind TOT in the league, however, as they bettered Spurs in every category (highest/best, mean, lowest/worst) for xG scored and conceded both Home and Away. 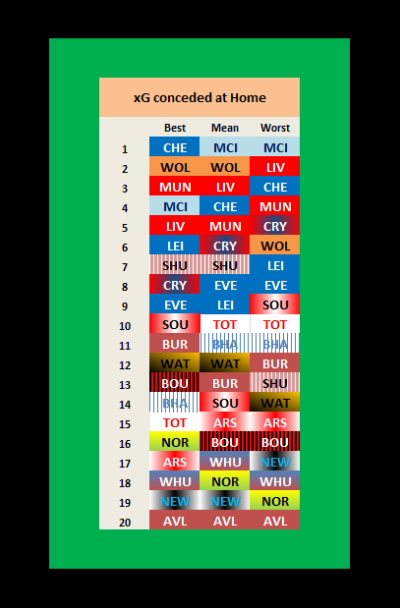 CRY were a top 8 side for keeping things tight at home (see left), but this might be a euphemistic way of describing their lack of attacking threat at Selhurst Park, which ranked 2nd worst across all 3 categories (see above).

Surprisingly, BUR‘s best attacking spell at home, during the second half of the season, ranked 6th highest in the division (see above), but appears to have come at the expense of the defensive side of their game. Certainly, they consistently conceded less xG in the first half of the season (see below).

LEI‘s game appears better suited to playing away from home. The Foxes’ best 8 gameweek attacking spell on the road ranked 2nd best in the league, and the xG they conceded during their worst sequence of away games was comparably better than any other team managed.  On average, they had the 3rd best away attack and 4th best away defence (see below), whereas at home these only ranked 13th and 9th best. 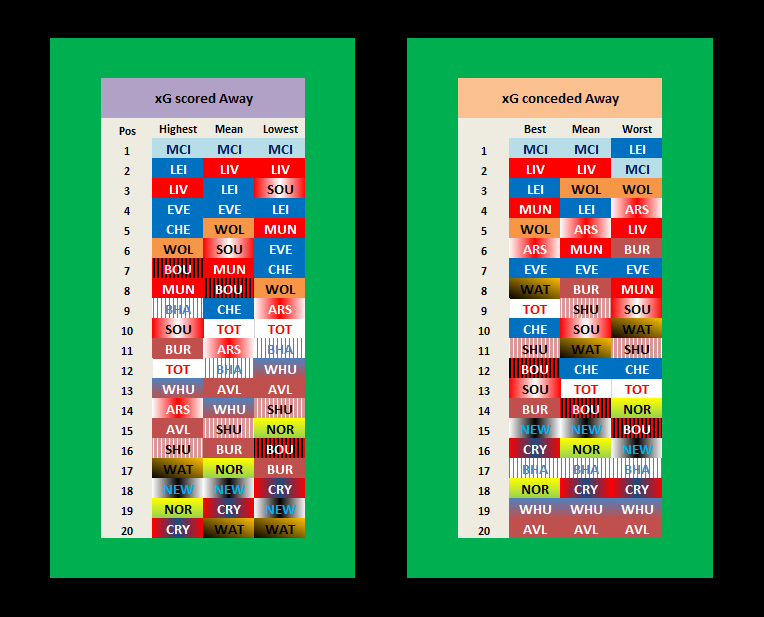 The overlapping between different teams’ highest, average and lowest ratios can be better visualised in the following charts.  First off, here’s the 8GW sequences of xG at home.  The number on the Y axis represents the number of xG that teams would be expected to score vs an average defence.

And here’s the 8GW sequences of xG expected to be conceded at home vs an average attack. 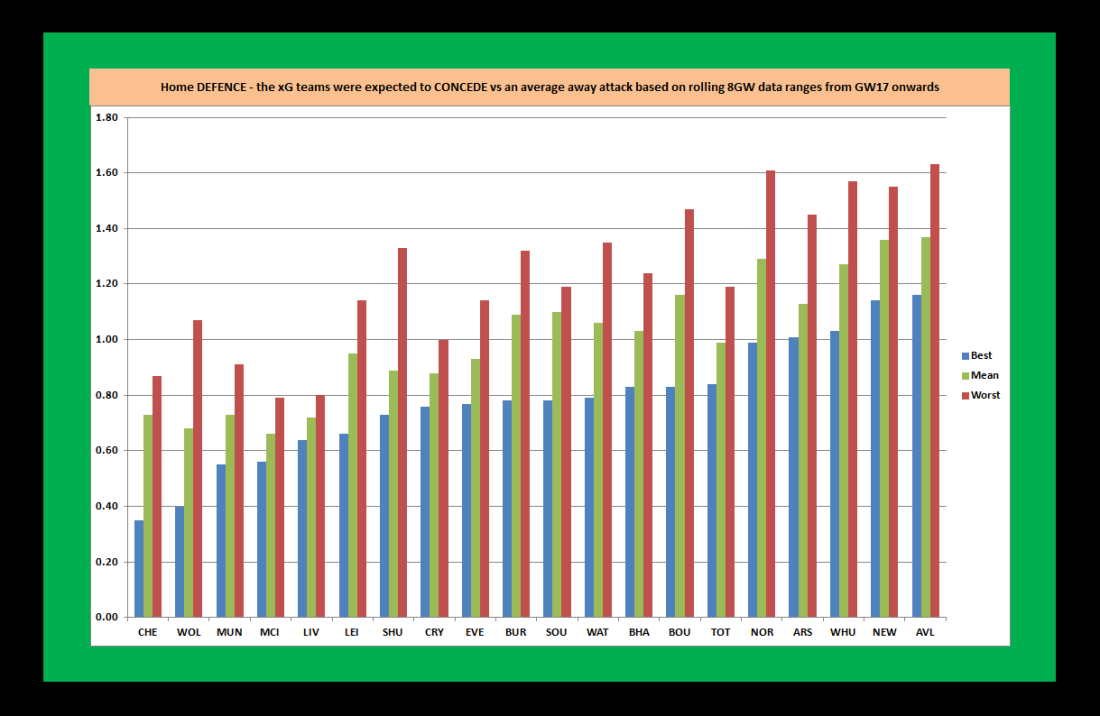 Another piece of information conducting this exercise provided me with was the difference between the average number of xG teams would be expected to score and concede vs average opposition.

Of the teams above, only LIV and SHU were not amongst the teams highlighted as having strong finishes to the season in terms of attack and/or defence at home and/or away.  The inclusion of EVE in the ranks of strongest finishers (Away defence) is the biggest surprise here, but can probably be explained by the fact that half of their last 8 away games came before lockdown.  If EVE can recover their pre-lockdown form, however, their defenders might represent good value if FPL Towers base their price points on the poor form shown after the Restart.

Hopefully, the insights gained from this exercise, combined with an accurate assessment of the difficulty of fixtures faced by teams at the start of the 2020-21 season, can give us a flying start.

Poker player applying transferable concepts such as expected value and probability to FPL. FPL is like poker; in the end, you have to go all-in! Newly signed up member of the Scout Network. View all posts by FPL Poker Player